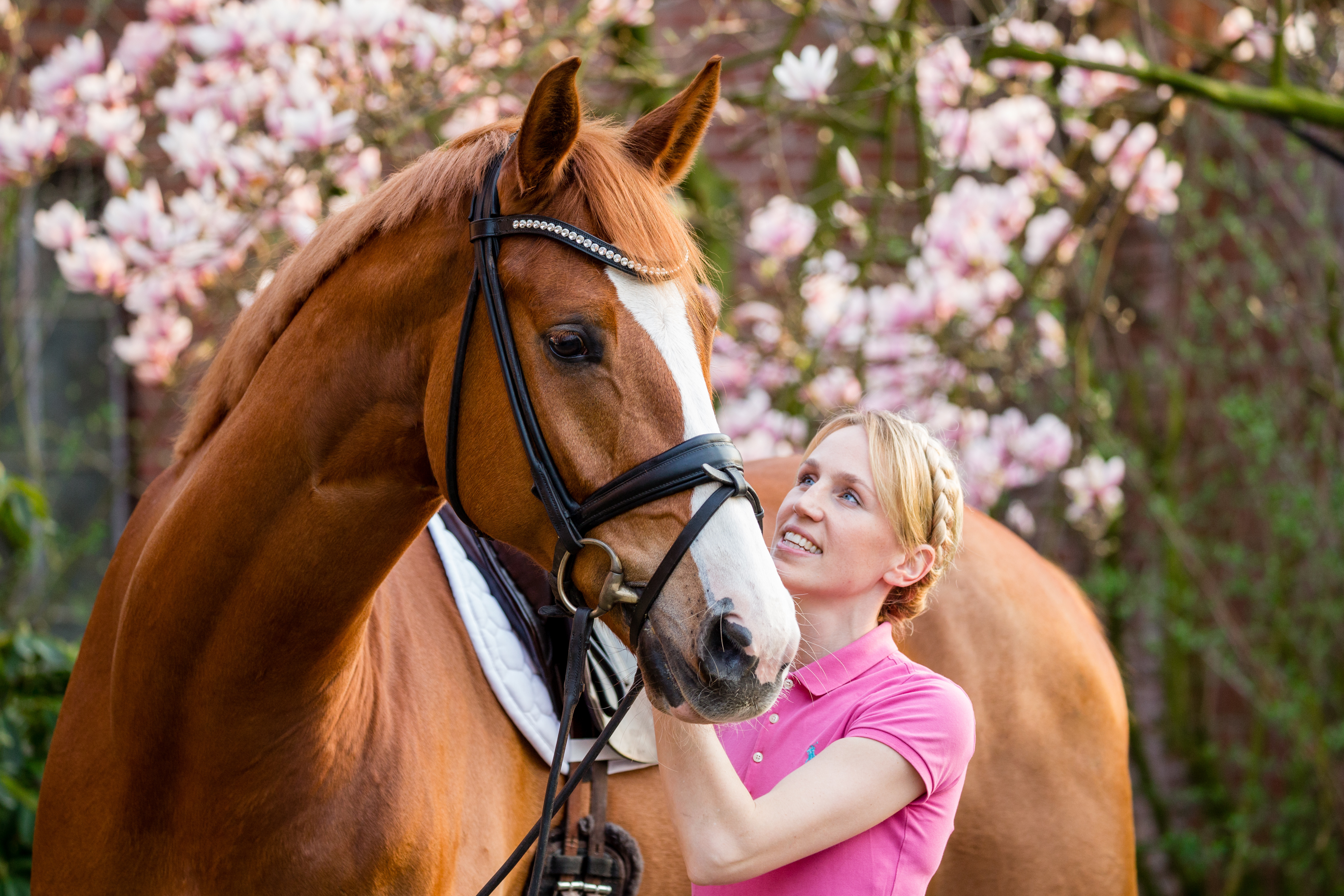 The business graduate Hedda Droege runs the family business Gut Dalmer. After having successfully arrived on the international show stage at a young age, she now concentrates mainly on breeding and training horses from remonte to Grand Prix level as well as on the management of Gut Dalmer. In training the horses, Hedda Droege orients herself on the principles of classical riding theory, focusing on the harmony between rider and horse.

It all started with Baroness Bibi, a cheeky pony she had trained herself. Then Hedda started to compete at tournaments with the Westphalian gelding Max, a school master with an all-round potential and strong nerves, and both achieved first victories and placements at medium and advanced level. Following these initial successes, Hedda earned an appointment to the Rhenish Junior Riders’ team with the opportunity to participate at Rhenish and German championships.

Another important step towards success was the co-operation with trainer and instructor Jürgen Koschel, a former top rider and trainer of different national teams. He had been training Hedda from 2006 to 2012, and Hedda obviously strongly benefited from his wealth of experiences for the training of her own horses. First successes already emerged after a short period of time when Hedda came in fourth at the Rhenish Championships and seventh at the Prize of the Best in Warendorf in 2007 with the graded stallion Ehrenwort.

Hedda found her dream team for competition and training with the two Westphalian mares Fifth Avenue and Laura Lux. She rode from success to success with Fifth Avenue and was honoured with a special award on the occasion of the 2008 International Horse Days in Oldenburg – the Rider’s Award in Gold. Besides, Hedda qualified in Oldenburg for the 2009 Meggle Championship Final in Dortmund.

„Hedda quickly advanced from the upper to the Grand Prix level. She virtually started from zero to hundred with us." - Jürgen Koschel (2009)

In the same year, Hedda finished fourth at the German Young Riders Championships with Laura Lux, she competed in the Final of the Piaff Challenge Cup (fourth place) and won both, Intermediaire II as well as Grand Prix-test in her age-group 25 years and younger in Donaueschingen. The nomination for the German B2-team was the crowning finish of an exciting year.

The crucial leap into international Grand Prix-sport followed in 2009 when Hedda participated at a number of horse shows, returning home with a number of top placings at the Grand Prix and Grand Prix Special.

In 2011, she earned an appointment to the German Dressage Futurity Squad and participated at the Nations Cup in Aachen with the German team aged 25 and younger. The German team finished second while Hedda won the bronze medal in in the individual division.

Within the following years, Hedda successfully established herself in professional sports. In 2014 Hedda Droege and Donatella won the qualification for Louisdor-Price at the Peterhof Dressur Gala in Perl-Borg. At the final of the Louisdor-Price, held in Frankfurt, Donatella then got honord as the second best newcomer horse for Grand Prix.

Thanks to her versatile qualification and university studies as Business Graduate, Hedda is today successfully working in many professions, as dressage rider, breeder, trainer and manager of Gut Dalmer.