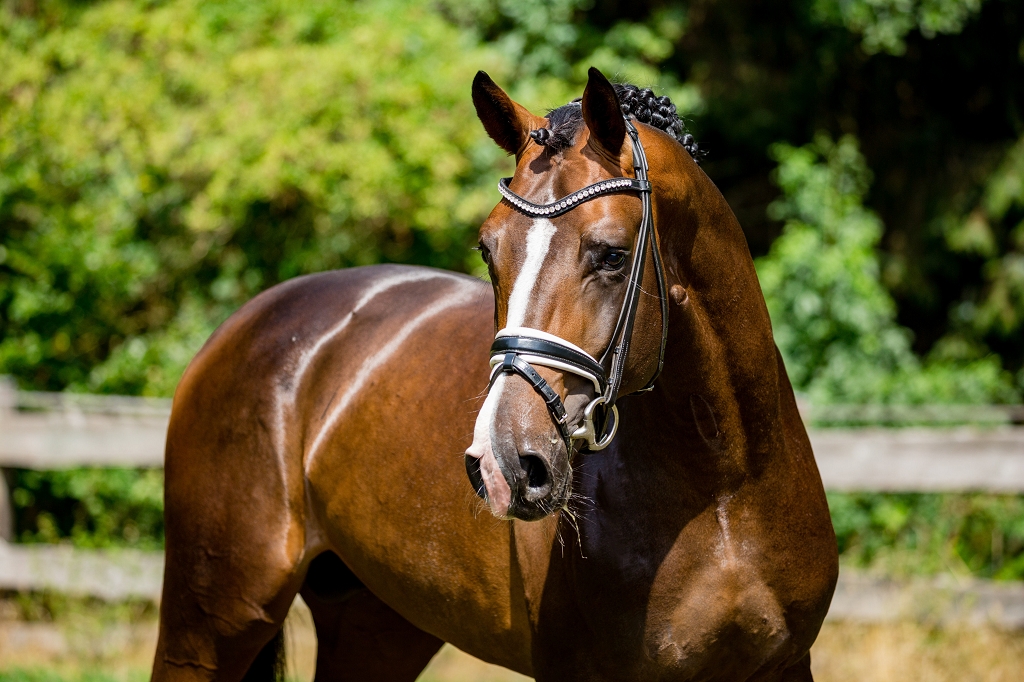 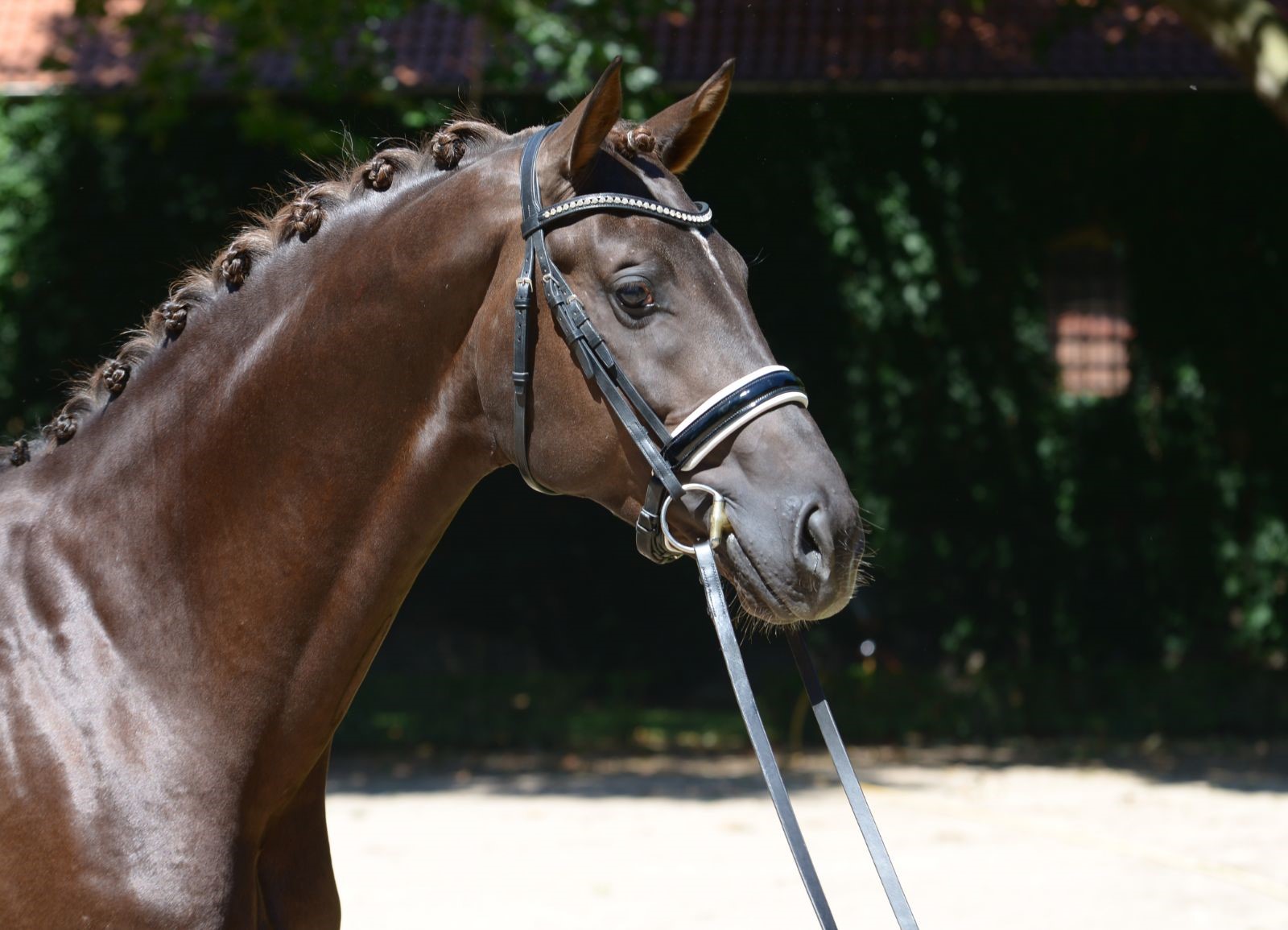 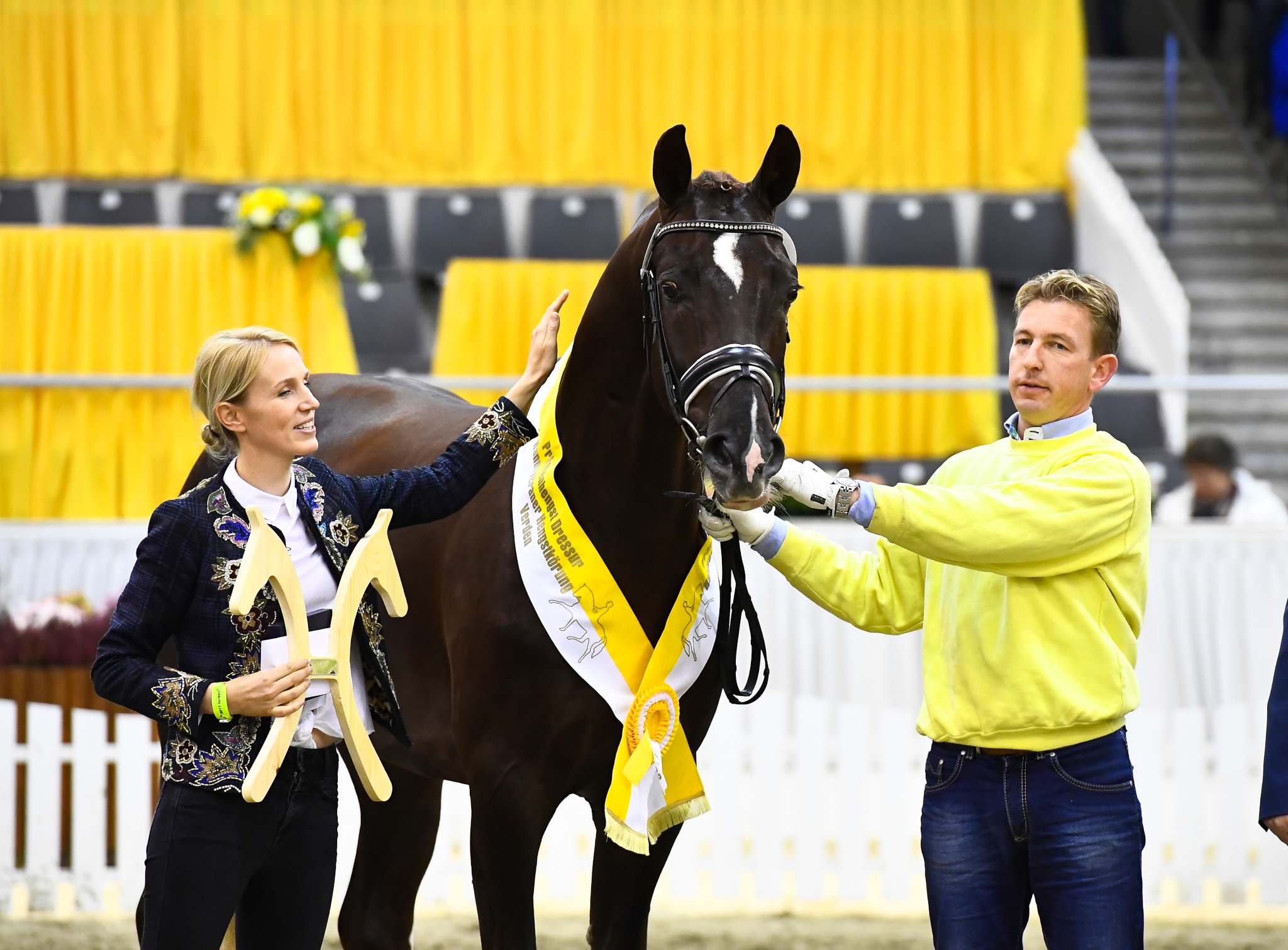 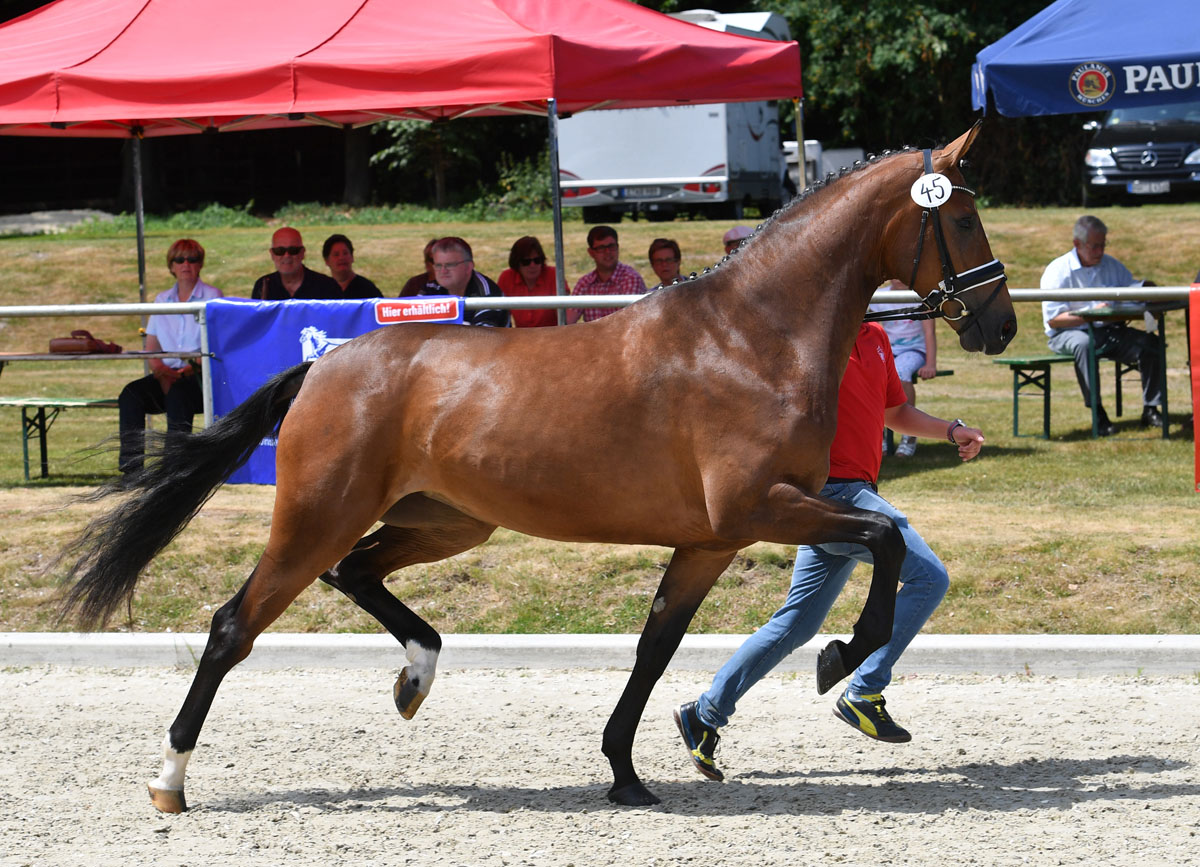 Year after year, our breeding program produces some promising young horses for dressage and breeding. After their early years in the herd on the pastures of Gut Dalmer, the three- and four-year-old remounts show their quality at the stallion licensing and mare shows. A small selection of our horses of the latest vintages is presented here.

The 2016 generation is mainly characterized by first-class mares. First and foremost the Vivaldi x Donnerhall daughter Lolita, who was the first Hanoverian-bred mare to be admitted to the Westphalian Elite Mare Show and finished as 1st Reserve Champion. With another mare in the final ring of the Elite Mare Show (Millennium x Dimaggio), several state premium mares and candidates for the Hanoverian premium as well as the Westphalian licensed stallion Ellis (Escolar x Dimaggio), the 2016 generation again produces numerous promising young horses for sport and breeding. 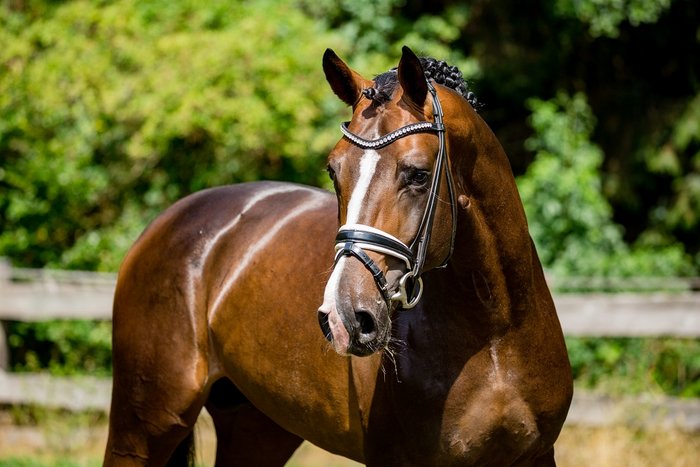 The licensed son by Escolar out of our foundation mare Delice by Dimaggio is a full brother to Espe, Emma Peel and Esquire. At the licensing he convinced with his striking movement dynamics and elasticity in all three basic gaits. Despite his size and youth, this young stallion is a jewel in handling, always friendly and turned towards people.
Under the saddle, Ellis inspires with a highly motivated work ethic. The young stallion enjoys learning new tasks and offers them with the finest of aids. As a three-year-old he was gently used in his first tests for young riding horses. Winning and placed in front he convinced with dream marks and coolness on the show ground. In 2020, he presented himself as the test winner at the 14-day test in Adelheidsdorf with a final score of 9.09 for dressage and an overall score of 8.5. He received a 9.5 for canter and rideability, a score of 9.25 from the test rider, 9.0 for walk, character, temperament and willingness to perform, an 8.5 for trot and a 7.0 in jumping.

The stallion is sold to Gestüt Sonnenbrink (Isabell Nowak) and stabled at the Krüsterhof Hinnemann, where he will be further promoted by Stefanie Wolf. In 2021 Ellis was honored with the suffix "NRW" by the Westphalian breeding association and is now called Ellis NRW. A

Ellis NRW is available for breeding in Westphalia, Hanover and Oldenburg through the Hinnemann breeding station at the Küsterhof. 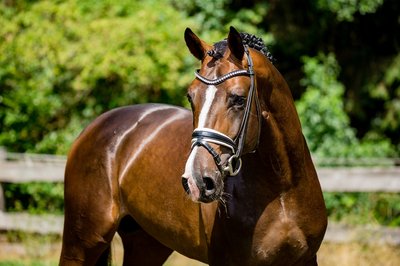 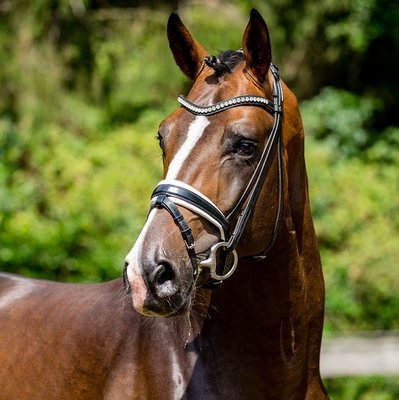 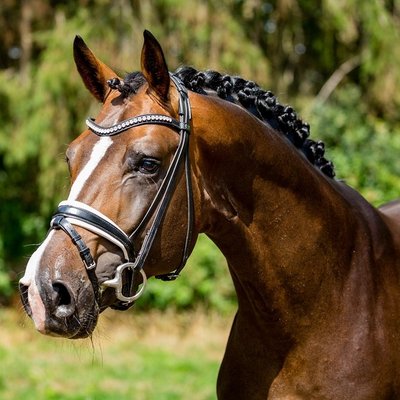 The Hanoverian bred Lolita by Vivaldi out of our foundation mare Donna del Mondo (Donnerhall x Weltmeyer) was not only the first Hanoverian mare to qualify for the Westphalian Elite Mare Show, but also became 1st Reserve Champion there! This light-footed, strong moving chestnut mare will remain as a broodmare at Gut Dalmer and will thus pass on the valuable blood of her dam to our following vintages. 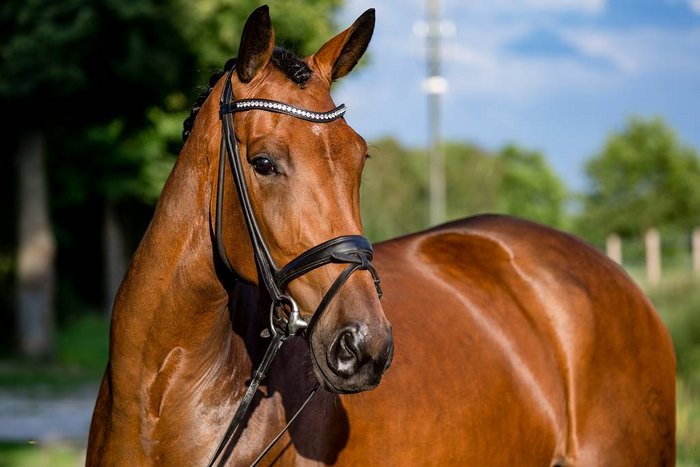 I have high hopes for our Ferro x De Kooning mare Follini. She passed her mare performance test as a three-year-old with a dressage final score of 8.3 and scored points with three very well-balanced basic gaits: She has a promising hind leg in trot with a lot of drive, an uphill canter and a very nice striding walk.

Since she was still in development as a three-year old, we gave her another time out in the pasture directly after the mare performance test, so that she had time to enjoy the rest of the summer until the beginning of winter and to grow out in peace. Starting in early 2020, she is now being trained in an age-appropriate manner and gently prepared for her first show appearances. Follini is very fond of people and has a very good grasp of the situation. Under the saddle she already gives the feeling that she is taking care of her rider in every situation - her reactions are always well-considered. She is an absolutely reliable horse that I enjoy more and more every day and I feel grateful to be able to work with her! 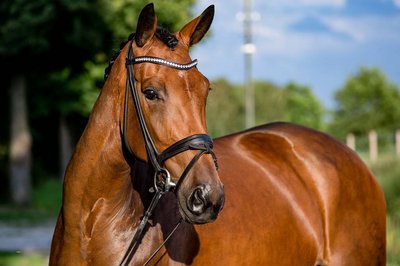 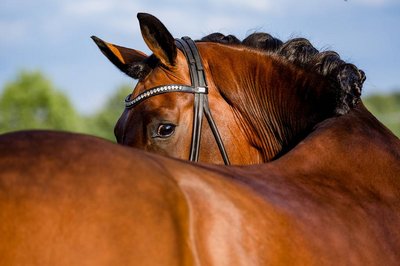 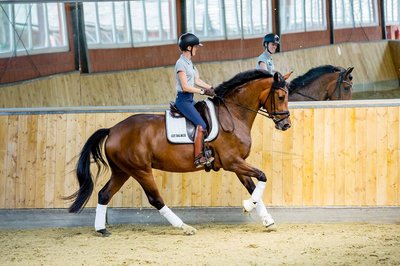 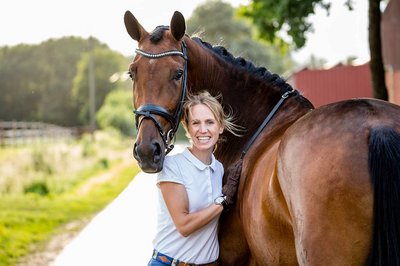 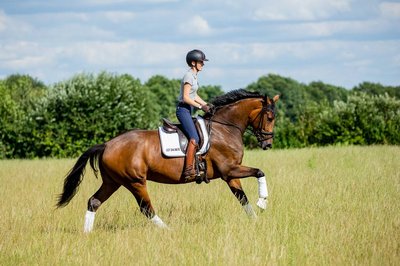 The 2015 generation has very interesting offspring. Three young stallions could be recommended for the main approvals, one of them was awarded as a premium stallion in Hanover and another one was stabled at the NRW State Stud. Among the mares born in 2015, we are happy to have two State Premium mares and one Hanoverian premium candidate. In addition, this year's crop also produced several other promising riding horses. 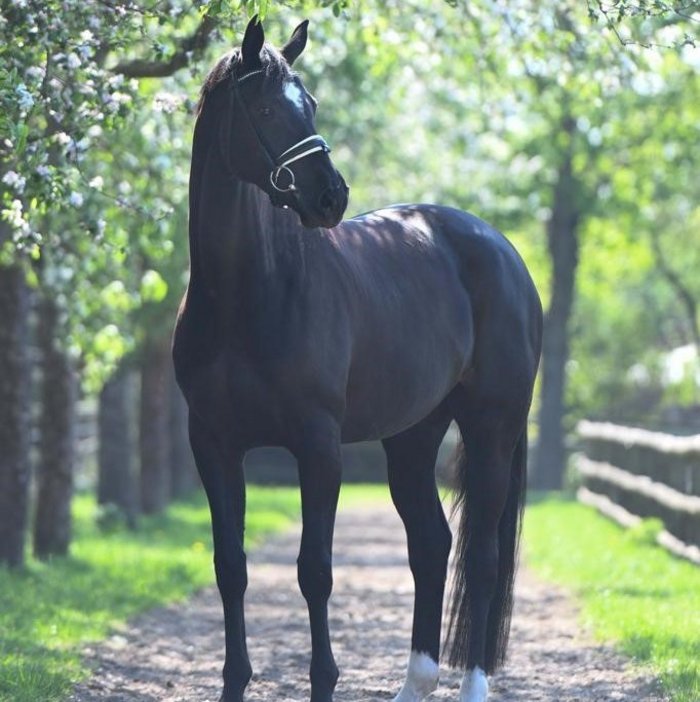 The strong type mare Sarafina is a successful mixture of her sire, the Oldenburg trademark stallion San Amour, and her dam Coconut Kiss, a state premium mare by Christ, which was bred at Gut Dalmer. She was awarded the Hanoverian Premium Certificate and passed a very good mare performance test with the dressage final score of 8.40 and the guest rider score of 9.0. This beautiful mare with a strong character is already highly committed under the saddle with dynamic, light-footed movements. Her active hind leg and her great elasticity are conspicuous.

Her first show starts she completed with victories and placings in tests for young riding horses, including the vice championship title in the Hanoverian Riding Horse Championships for 3-year old mares and geldings. The mare was nominated by the Hanoverian Verband for the Bundeschampionat in Warendorf. At her first show starts in riding horse tests and dressage horse tests class A, she directly placed first and in second place.

Sarafina: The diva among our young horses looks forward to a promising future in dressage and is currently being carefully prepared for the upcoming tasks by Stefanie Wolf. 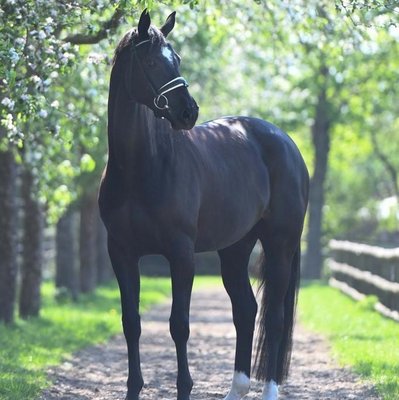 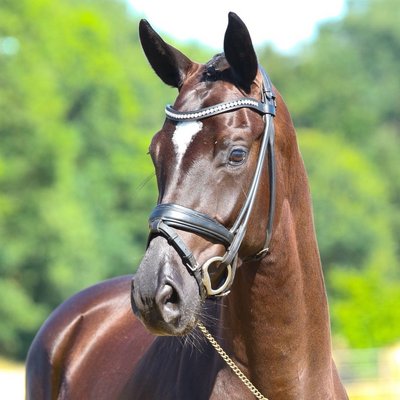 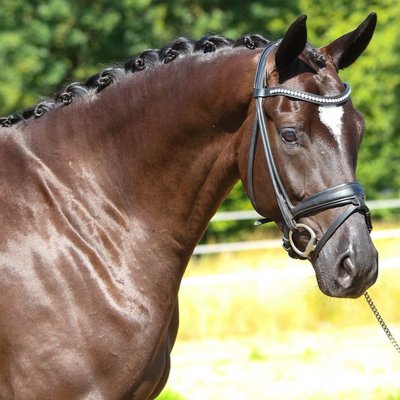 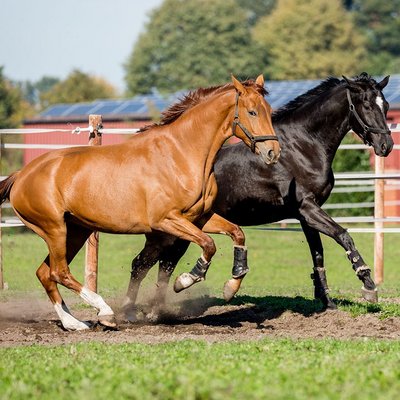 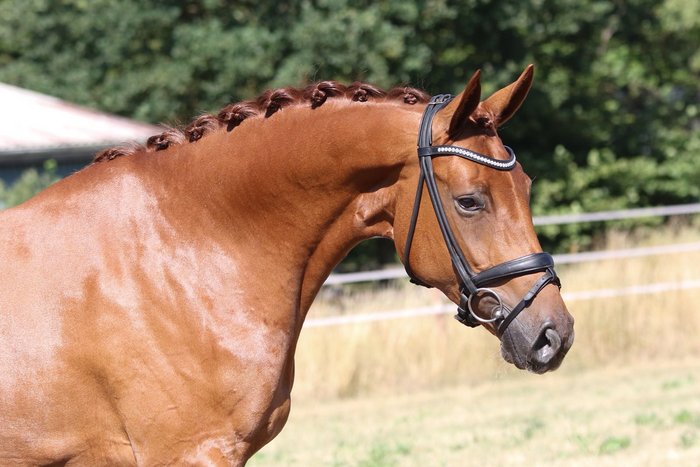 Emma Peel is a full sister to our Espe out of the 2014 crop and the stallions Ellis and Esquire. The Escolar x Dimaggio-daughter was an "Endring" mare in Westphalia and was awarded the State Premium. She completed her mare performance test with a dressage final score of 8.90, receiving the perfect foreign rider score of 10.0.

This chestnut mare with strong movements convinces with her elasticity, great ground covering and a natural cadence. At the same time she has strong nerves and is well-balanced with a strong work ethic and close relationship to her people. At Gut Dalmer, Emma Peel is the entertainer in the stable and is very playful, people-oriented and curious.

She has already been victorious in tests for young riding horses in her few show appearances so far. After she has proven herself under saddle, we have now taken Emma into breeding, where she can pass on the blood of her full siblings. For 2021 she is occupied by Dynamic Dream, the winning stallion of the Westphalian main licensing in 2019. 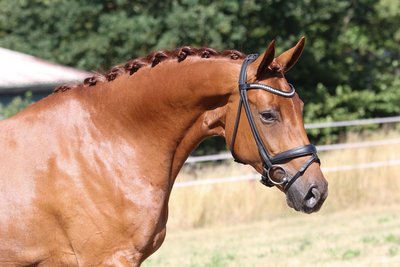 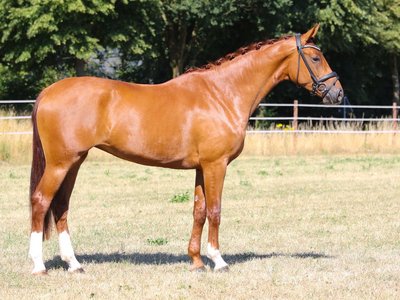 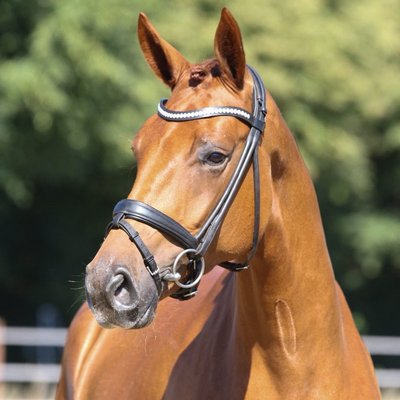 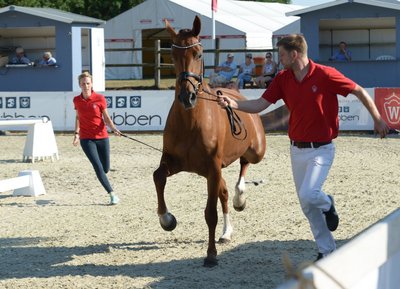 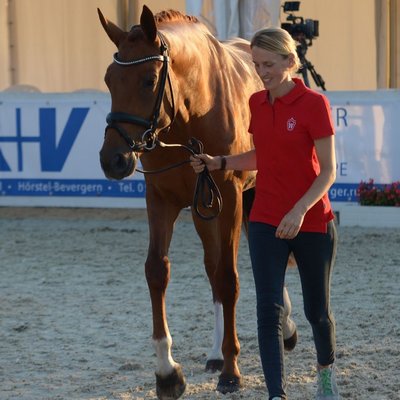 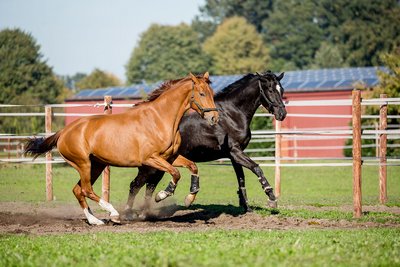 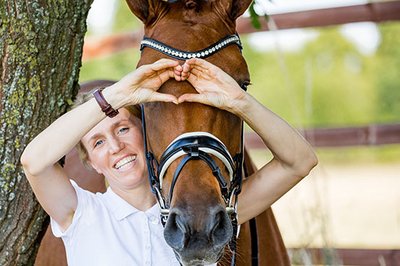 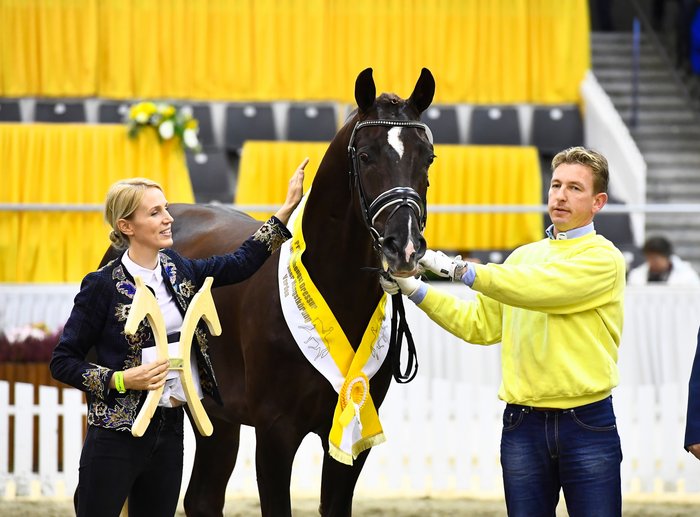 Nechristo was a premium stallion at the Hanoverian licensing and is the first Negro offspring in stud service for the German Warmblood breed. He is owned by the Celle State Stud.

Nechristo is characterized by his unbelievable power from the hindquarters, which he transforms 100% into swing and elasticity via his muscular back. Remarkable is his pronounced shoulder freedom. His father "Negro" has not only left his mark on Nechristo. All his offspring have a solid, strong foundation, a striking neck with a muscular back and an excellent work attitude with very good rideability. 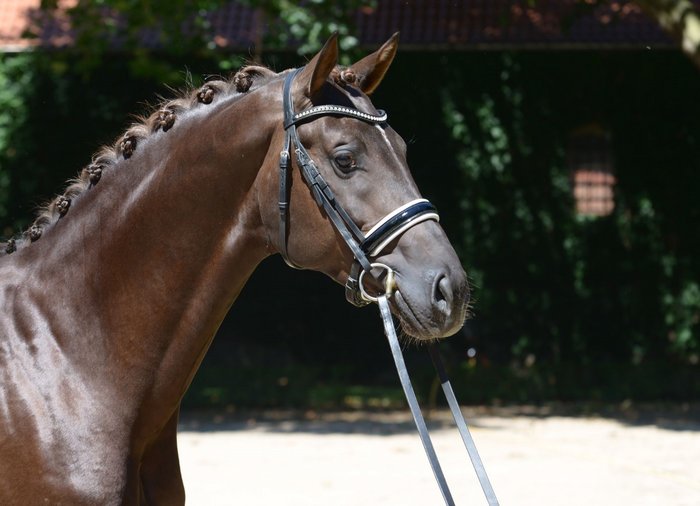 The dark chestnut by Sezuan x De Kooning presents itself in motion, full of verve, elastic and with a controlled regularity. He has everything that a future dressage athlete needs.

He completed his 14-day test in Adelheidsdorf in April 2018 with an excellent dressage final score of 8.49, the third best result of all participants. SELECTRIC was almost a "perfect" by the foreign rider, who gave him a sensational 9.75. He also scored particularly high in the evaluations for his willingness to perform and his wonderful canter with a score of 8.5 each.

Selectric is owned by the NRW State Stud and is available to breeders there.